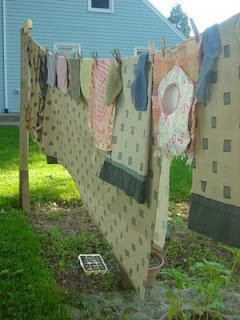 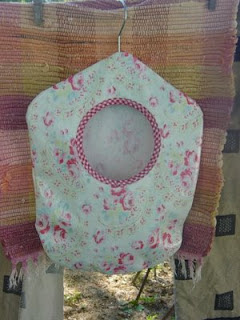 Close up of said peg bag (Kelli at GohnCrazy - No, you are not GohnCrazy, you have not received your peg bag yet. Tomorrow...I promise. Carrie can vouch for me...I do mail things. I do.) 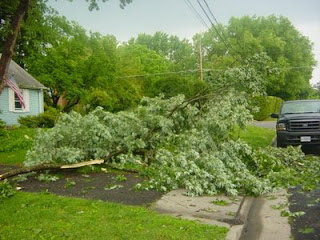 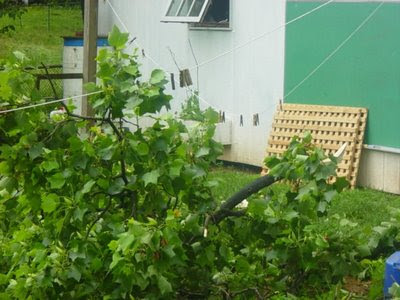 Here as promised, many moons ago, is a photo of my dear departed clothesline shortly after the tornado. Happy Friday everyone!

Stop Me Before I Throw Out Something Important

It really was this post on Nini Makes that got me thinking. Those words..."They only collect things they love and keep only things that are special."

So I have been on a clutter, nay, stuff purge today and I am worried. I have already made a trip to the local thrift shop to drop off three boxes. I no longer worry about trash? keep? recycle?, now my mantra is "Does this have meaning to me?".

The house is worse looking than when I began, but things always get worse before they get better...right?
Posted by Gift of Green at 3:21 PM 8 comments:

And so with the sunshine and the great bursts of leaves growing on the trees, just as things grow in fast movies, I had that familiar conviction that life was beginning over again with the summer.

I must be honest when I tell you that I have not had a working clothesline since last Monday. Someone is clearly irked as we had yet another round of high winds, driving rains, and power outages. More limbs came down at Chez WannaGreenie knocking out my clothesline yet again.

So while we rumble out of the wreakage, what's going on at Chez Vous? Let's hear from the Novices, shall we? This means you Carrie, the Browns, kkmamakai, and Yay Pie. How goez it?

On a personal note, I am pleased as punch to finally be able to announce that I will be beginning a new job of sorts as an elementary school librarian in the fall. What are some of your favorite books from your days as a K-5er?
Posted by Gift of Green at 1:10 PM 9 comments:

Inflammatory breast cancer took the life of my cousin almost six years ago.

It is difficult to absorb, but it is reality.
Posted by Gift of Green at 11:40 AM No comments:

To Make a Long Story Short (too late)...

Green Nana got us a subscription to the Sunday New York Times as a gift (and yes, it's more eco-friendly to read online, but not nearly as texturous, as my friends SHH would say) and this past Sunday a story on the front page of the style section pretty much jumped off the page at me.

A piece about fashionable Siggs? No. Swanky tree forts? Nah. The latest in organic cottons? Nope.

A story about New York/New Canaan resident Melissa C. Morris, who, according to the Times article is just so darn nice. And...wait for it, wait for it...she has a blog. 'Nuf said. I was all over it and yes, she does seem totally fun.

As I read through the "back issues", I found this post, which combines my love of windows into other people's worlds with a bit of green to boot.

The early lilacs became part of this child,
And grass, and white and red morning-glories, and white and red clover, and the song of the phoebe-bird,
And the Third-month lambs, and the sow’s pink-faint litter, and the mare’s foal, and the cow’s calf,
And the noisy brood of the barn-yard, or by the mire of the pond-side,
And the fish suspending themselves so curiously below there—and the beautiful curious liquid,
And the water-plants with their graceful flat heads—all became part of him.

The field-sprouts of Fourth-month and Fifth-month became part of him;
Winter-grain sprouts, and those of the light-yellow corn, and the esculent roots of the garden,
And the apple-trees cover’d with blossoms, and the fruit afterward, and wood-berries, and the commonest weeds by the road;
And the old drunkard staggering home from the out-house of the tavern, whence he had lately risen,
And the school-mistress that pass’d on her way to the school,
And the friendly boys that pass’d—and the quarrelsome boys,
And the tidy and fresh-cheek’d girls—and the barefoot boy and girl,
And all the changes of city and country, wherever he went.

His own parents,
He that had father’d him, and she that had conceiv’d him in her womb, and birth’d him,
They gave this child more of themselves than that;
They gave him afterward every day—they became part of him.

The mother at home, quietly placing the dishes on the supper-table;
The mother with mild words—clean her cap and gown, a wholesome odor falling off her person and clothes as she walks by;
The father, strong, self-sufficient, manly, mean, anger’d, unjust;
The blow, the quick loud word, the tight bargain, the crafty lure,
The family usages, the language, the company, the furniture—the yearning and swelling heart,
Affection that will not be gainsay’d—the sense of what is real—the thought if, after all, it should prove unreal,
The doubts of day-time and the doubts of night-time—the curious whether and how,
Whether that which appears so is so, or is it all flashes and specks?
Men and women crowding fast in the streets—if they are not flashes and specks, what are they?
The streets themselves, and the façades of houses, and goods in the windows,
Vehicles, teams, the heavy-plank’d wharves—the huge crossing at the ferries,
The village on the highland, seen from afar at sunset—the river between,
Shadows, aureola and mist, the light falling on roofs and gables of white or brown, three miles off,
The schooner near by, sleepily dropping down the tide—the little boat slack-tow’d astern,
The hurrying tumbling waves, quick-broken crests, slapping,
The strata of color’d clouds, the long bar of maroon-tint, away solitary by itself—the spread of purity it lies motionless in,
The horizon’s edge, the flying sea-crow, the fragrance of salt marsh and shore mud;
These became part of that child who went forth every day, and who now goes, and will always go forth every day.

Posted by Gift of Green at 1:22 PM No comments:

Dream a Little Meme of Me 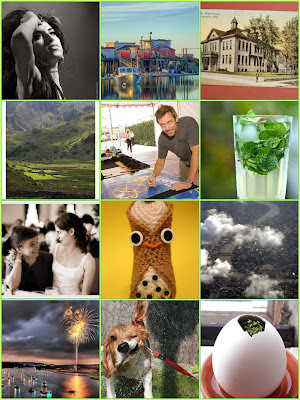 Mary Beth over at Saltandchocolate shared a cute little meme going around.

Here are the rules (stolen right from Mary Beth's blog):

a. Type your answer to each of the questions below into Flickr Search.
b. Using only the first page, pick an image.
c. Copy and paste each of the URLs for the images into fd's mosaic maker.

1. What is your first name? Amy. Of course Amy Winehouse popped up. I have her album Back to Black and I sure do like her. I hope she makes it through this rough patch.

2. What is your favorite food? Lobster. And not so much the lobster, but the ritual of the lobster, the warmed butter, the eating with family and friends at a fun restaurant, and leftovers in a roll of course (if there are leftovers).

4. What is your favorite color? Green, of course!

5. Who is your celebrity crush? Hugh Laurie. My favorite line of his from House: "I know you're in there. I can hear you caring."

6. Favorite drink? Mojito. Love it with fresh mint from the garden. Anything with rum and sugar cannot be bad.

8. Favorite dessert? Cannolis! And look, this image is named for my very favorite line from "The Godfather": "Leave the gun. Take the cannolis."

9. Dream vacation? London. I think it would be a perfect place for Green Husband and I to take the kiddies. Lots to do, so much history which I love, and easy to navigate. While we were in the UK we would visit Joanie (don't worry Joanie, we'll call first).

10. What do you love most in life? Our freedom. We take it for granted but we exercise it every day in love and in life.

Email ThisBlogThis!Share to TwitterShare to FacebookShare to Pinterest
Index memes

A Little Too Much Green Redux

So I knew it was supposed to be hot this weekend, but *that* hot?

Green Husband, Pip, Sprout and I headed out with my SIL and her family for our first overnight camping trip with four children under five. Did I mention that it was supposed be hot? Arriving in Southern Maryland in the fog, we thought, "Now how hot can this be?" It was hot. Did I mention that?

After several hours of constant hydration and inching around the campsite, we gave up and headed for the beach, which, luckily, was only several minutes away. My children have never been to the beach. Let me just say...there was crying when we had to leave the beach. Always a good sign. My SIL and I tried to figure out what was wrong with the beach - meaning, there was no traffic on the way there, there was plenty of parking, the beach was filled with pleasant people all enjoying the Bay, there was an ice cream shop a street over from the boardwalk, and the town seemed adorable. Why? Why no one at this beach? Let's just keep this beach a little secret between you and me, eh?

Heading back to the hell, er, delight, that was our campsite we sweated around until about 7:00 when we were treated to such a spectacular show of cloud to cloud lightening that we decided to enjoy the rest of the show from inside the safety of our trucks. I have never struck a camp so quickly. I say, better the camp than me. We rode home through one of the worst lightening storms I have ever been in, complete with downed tree across the highway.

Today we are drying clothes on the line and using those "points" to run our air conditioning.

Corinne, count this trip as summer adventure and challenge! :)
Posted by Gift of Green at 1:16 PM 13 comments:

Email ThisBlogThis!Share to TwitterShare to FacebookShare to Pinterest
Index beach, camping, Summer Adventure Challenge, the heat my god the heat, The Wanna-greenies

A Little Too Much Green

Brief update: Thankfully my family and my home are safe and sound after yesterday's tornado activity. Clothesline...not so much. Pictures forthcoming.
Posted by Gift of Green at 9:23 PM 4 comments:

We Have a Winner!

I blazed new territory and used the integer generator at Random.org...and who should it pick to win the wonderful peg bag handmade by Joan over at Nini Makes?
...

Congratulations, Kelli! Please contact me with your mailing address and I will ship the peg bag off to you. As Carrie can tell you, I have some sort of aversion to the post office, but I will get both things off in the post this Thursday.
Posted by Gift of Green at 10:22 PM 2 comments:

Welcome to Gift of Green!

Gift of Green
My name is Amy. I live with my husband and two children (Sprout and Pip) in plant hardiness zone 7.