It's that time of year again.  I am so ready for summer.  I am very lucky that my job allows for the summer off, yet...  Around this time of year I get a little bit nervous about being a temporary Stay-At-Home-Mom.   Will I find the right mix of structure and fun?  Can I successfully establish a routine for my children and myself?  How much practice will it take to navigate the grocery store with two kids in tow?  Will I ever manage to get dinner on the table?  Yes, all of these things will take some getting used to...  What would be your tip for a successful summer for this seasonal SAHM?
Posted by Gift of Green at 9:36 PM 2 comments:

There was a time when I lived in Seattle, Washington. There I met a woman who would become my closest and nearest friend way out there in the Pacific Northwest. We met at "the office" and for our mid-morning coffee breaks we would head over to this little coffee shop where we would order this thing called a latte. We would order a single, short, 2% latte. When I headed back East for Christmas I remember bringing back the same gift for all of my relatives: coffee made by this company called Starbucks. No one had ever heard of it.

I write about this friend today because we have recently reconnected, as they say. I moved to the East Coast, she moved to Italy to become an au pair. We lost touch as people do. Perhaps it was my fault - perhaps it was no ones.

I began thinking about her more and more after I started writing for Gift of Green. I think it was because, other than my parents, she was the first person I'd ever met who really dug the natural world What did I learn from her? Nothing actually. What do I mean by that? I didn't learn how to do all of the things that she did: hiking in the midst of bears, bird-banding, downhill skiing, recognizing bird calls, camping, owning gators. But what I did learn from her is that these things exist. Weird, huh? That you might not even realize that these things are in the realm of possibilities? It's like when we say the scary thing about being a new nurse is not not knowing, but not even knowing that you don't know.

The world of blogging has opened up a lot of these windows into worlds I've known nothing about. There are so many talented women writers who are just so interesting you want to have them all over for coffee. And there is so much to learn.

But getting back to my friend from Seattle. Of course over five years now since we first lost touch I did what any reasonable, slightly obsessive person would do: I googled her. Thankfully her name popped up. No longer in Seattle, but oh, I hit gold: her email address. I cautiously wrote her a note and sent it out into the ethernet. And waited. Her reply came the same day and was basically, "How the hell did you track me down? So where were we?"

My friend once made me a tape (remember those days?) that included that Neil Young song that goes "Comes a time when you're drifting, comes a time when you settle down." I drifted. I've settled down. But in many ways this green adventure, while mostly via armchair, has let me drift in a whole new way. A nice way.

Thank you, AB, for helping me know what I didn't know about the gift of green.
Posted by Gift of Green at 9:51 PM No comments:

There are about five weeks left 'til the end of the school year around these parts and although I love my job, oh yes I do, I am giddy, just positively giddy at the thought of Summer and Its Possibilities. I have emailed Mary Beth at saltandchocolate, privately (oops, not anymore! Sorry Mary Beth!), cajoling her, er...coaxing her..., er, politely asking her to whip up a post (in all her spare time) about her plans for the summer. I'm sure we're all looking forward to reading about her plans and then copying them, er, adapting them to my, er, ONES situation. : )

So yes, I am a librarian and so yes, how does this benefit you in any way, shape or form? Well...no way, really. Although I must say that I do read some darn good books that are of interest to children from about age five to about age 12. My current read is the most clever and most touching little gem (also a Newbery Honor book --Newbery Medal/Honor --> award(s) given annually to the most distinguished work of literature for children published by a U.S. citizen or resident--): The Evolution of Calpurnia Tate written by Jacqueline Tate: a doctor, lawyer, and now novelist {see *spare time* above}. 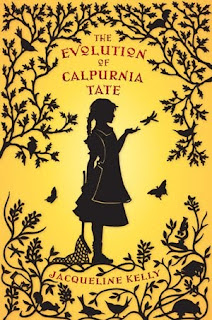 It is 1899, it is Texas, it is hot and Calpurnia Tate has become an apprentice of sorts to her naturalist grandfather. This is a wonderful work of observation and study of the natural world, folded together with an 11 year-old's view of life at the turn of the century.  If you liked the feel and tone of The Seven Wonders of Sassafras Springs, Love, Ruby Lavender or A Year Down Yonder, I do believe that you will thoroughly enjoy this book as well.
Posted by Gift of Green at 11:05 PM 1 comment:

First, the apology to my persistent commenters...for some reason my comment moderation option was selected so your poor comments were languishing while waiting to be approved.  Should not be a problem now.

Second, I was looking for a insulated picnic/shopping basket like the ones featured here, and then came across this adorable bag from Reisenthel that they are using as an incentive for their Reisenthel initiative.  I'd love to get my hot little hands (or three) on one of these beauties, but I do believe they are only being sold abroad.  Great idea though and I hope they make their goal!

Posted by Gift of Green at 1:04 PM No comments:

Today my husband came home to find a notice taped to our front door.  It was from the County telling use we'd better mow our lawn OR ELSE!

We were incredulous as we looked around our neighborhood and saw the house with eight cars routinely parked on the street, the house that has been "under construction" for two years now, and the people who routinely "California roll" through the stop sign on our corner.  We had a good laugh and then sat in the tall, tall grass with a glass of wine.

Not really because it started to rain buckets.  Guess we won't getting the mowing done once again.
Posted by Gift of Green at 8:29 PM 1 comment:

Welcome to Gift of Green!

Gift of Green
My name is Amy. I live with my husband and two children (Sprout and Pip) in plant hardiness zone 7.